The US has carried out rare air strikes on Syrian pro-government forces after what it called an "unprovoked attack" on allied Kurdish and Arab fighters.
US officials estimated that 100 pro-government fighters were killed in the incident on Wednesday.

They had allegedly tried to take ground east of the River Euphrates captured from the Islamic State group by the US-backed Syrian Democratic Forces.
State media said the US "aggression" left dozens of people dead or wounded.
The Middle Euphrates River Valley serves as an informal demarcation line in eastern Syria, with the government controlling the western side and the SDF the east.

There were several skirmishes in the valley last year, as both sides sought to drive IS militants from their last major stronghold in the country.

"Coalition service members in an advise, assist, and accompany capacity were co-located with SDF partners during the attack 8km east of the agreed-upon Euphrates river de-confliction line," a statement said.

"In defence of coalition and partner forces, the coalition conducted strikes against attacking forces to repel the act of aggression," it added, asserting its "non-negotiable right to act in self-defence". 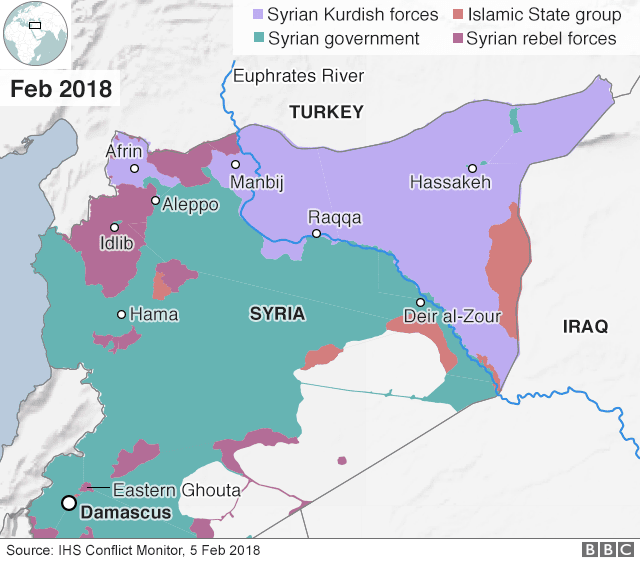 Unnamed US military officials subsequently told reporters that about 500 pro-government fighters, backed by artillery, tanks, multiple-launch rocket systems and mortars, were involved in the assault.

One SDF fighter was reportedly wounded in the incident. There were no American casualties.

"We suspect Syrian pro-regime forces were attempting to seize terrain SDF had liberated from [IS] in September 2017," one official told Reuters news agency.
The forces were "likely seeking to seize oilfields in Khusham that had been a major source of revenue for [IS] from 2014 to 2017, the official added.

The US-led coalition had observed a slow build-up of pro-government forces in the area over the past week and had alerted Russia, which backs the Syrian government, to the presence of SDF forces in the area, according to the official.

The Syrian Observatory for Human Rights, a UK-based monitoring group, confirmed there had been an attack on SDF positions near the town of Khusham, 10km (6 miles) south-east of Deir al-Zour city, and put the death toll at about 20.

On Thursday morning, Syrian state media reported that the US-led coalition had bombed "popular forces" fighting IS and SDF forces east of the River Euphrates, denouncing what they called a "new aggression" and "an attempt to support terrorism".

An Al-Ikhbariyah TV correspondent said the bombing left "dozens of dead and wounded" and identified the pro-government fighters as "local people".